On The Lake -- Looking Back

After a long winter, spring is eagerly awaited. I have noted  reliable indicators, mainly birds, of the coming of spring.

May 10 – Orioles appear at feeder

June 2 – Mayfly hatch. Much smaller than years ago. But still a return.

June  20 – Fireflies light up the night.

July 7 – Retreatment of locations still having nuisance weeds or milfoil

Winter snowfall was below average.

Overall not a snowy winter – Lake levels are low

April  - much warmer than average

This February was one of snowiest on record.

Cadillac Schools closed for record 17 days this winter Usually about 5.

April 12 – Ice is out on lake Mitchell

April 16  - Wood frogs and peepers sing from the swamp lands

This February was one of snowiest on record.

Cadillac Schools closed for 17 days this winter. A  record. Usually about 5.

May 19 – Coves are surveyed

May 25 – Little Cove is treated

May 31 – Pelican spends day on the lake

December 25 to January 7 Daytime highs in teens. Lows below zero to single digits.

As newsletter goes to press (April 14) spring is still a no-show. 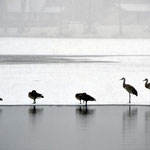 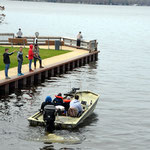 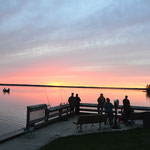 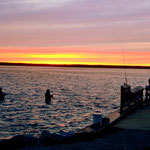 On the Lake Archives -- Highlights from previous years...Click Here.